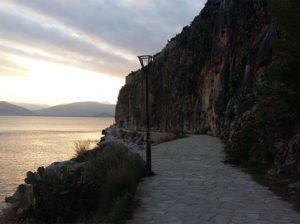 After lunch in the small graphics taverns or the coffee just accross Bourtzi, its time to rebuilt body and spirit. Put on your athletics shoes and here we go… 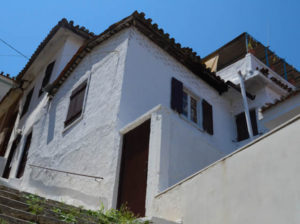 When I trace back my memory to my childhood, I always remember the summers that I used to spend in my grandma’s house in the old city of Nafplio. I was young and curious to discover the heart of the beautiful old town. For an unexplained reason, something was dragging me every time to explore the small side streets, the blossoming balconies and the small passages that were created by the red and white bougainvilleas. I was climbing up the stairs, I was losing myself to the narrow alleys and I was trying to find my way to the Psaromachalas square. At the end, when I was finally reaching my goal, I used to sit beneath the old town fortification in order to enjoy the magical view of the fortress of Bourtzi, the area of “the Five Brothers”, the beach, the “Banieres” (an area that used to be a natural swimming pool), the Argolic gulf, the hill of Acronafplia.

Walking throughout history
Nowadays, the scenery remains almost the same. Many of the houses of the old town have small doors and windows that are dated to the years of the Ottoman Empire. If you love photography, you will be more than pleased while walking around the old city. The area of Psaromachalas is probably the oldest area of the town and the rumor has it that the name derived from the fishermen (“psaras”) that used to live there since the Byzantine times.
When taking a tour around Nafplio you can discover the hill of Acronafplia, the church of St. Spyridon and the Syntagma square. It is up to you.

Must see
As a part of the Orthodox Easter celebrations, the picturesque alleys around Psaromachalas are full of people due to the liturgy of the Holy Friday that is held outdoors. The magical scenery is set by the decorated Epitaphio (the symbolic bier of Christ), the sound of the choir and the lit candles that everyone is carrying. If you happen to be in Nafplio these days, follow the procession of the bier through the streets and you won’t regret it.

Tip
If you visit St. Sophia, a little church hidden between the narrow alleys near Labrinidou str. (which is a Byzantine monument of the 11th century) don’t hesitate to follow the small passage on the right part of the church. As you come down, you will find Kapodistriou str. where the church of St. Spyridon is located.

How to get there
By car, as you come up from the rampart of the “Five Brothers” towards Nafplia Pallas hotel you will reach Psaromachalas square.
Otherwise, at the end of Farmakopoulon str. you climb up the stairs. (Beware, they are a lot!) 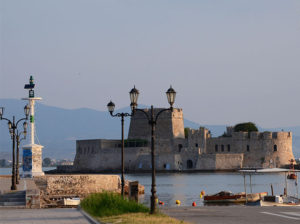 Walking to the end of Akti Miaouli, you will meet Nafplio’s lighthouse. There’s no way not to notice it. It is one of the favorite places in the city and perhaps the busiest in the summer months.

THE LION OF BAVARIAN 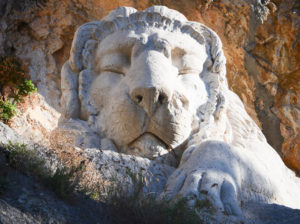 This is the famous Lion of the Bavarians, created in 1836 by the German sculptor Siegel, when King Ludovik, Othona’s father, asked him to build a monument to the soldiers of the Bavarian Kingdom who died of typhoid in 1833 to 1834.
The artist then carved into the rock a lion, like the one that was set up in the Swiss Lucerne, in memory of their compatriots killed in Paris during the French Revolution.

Did you know?
The locals call the sculpture and “Agouroon” (cucumber in the ancient Greek), since they support that the soldiers died because they eat many cucumbers!