Palamidi castle: enchantment from above
Or otherwise known as the 999 steps! If you are an extreme person and the winds don’t favour for kite surf, you can take the steps up to Palamidi and keep yourself in excellent shape at the same time. And, to be frank, the stairs are only 857!

Which road to choose?
To be more serious, the idea is not so extreme, considering that you can make resting stops along the way, seating on the larger steps and having the unique view of Nafplio and of the sea as a reward.  There is, however, the option that the majority of the visitors prefer; get inside your car and drive to the east side of the castle.

Castle and visionaries
Well done! You have just arrived to one of the most important and best-preserved castles in Greece, an exquisite example of Venetian architecture of the 18th century. The hill at which the castle is located was named after Palamidis, the hero of Homer’s Epics. It is said that, in 1686, the Venetian Commander-in-Chief Morosini envisioned the construction of the castle, whose architectural design was undertaken by governor Grimani. In 1715, just one year after its completion, it was occupied by the Turks and just one century later it finally came to the possession of the Greeks.

The bastions and their history
At that time, the bastions, which initially had Venetian and afterwards Turkish names, were «rebaptized» by the Greeks. So, the first bastion is called Grimani, the next one is Robert (French philhellene who was killed in the battle of Acropolis) while the remaining ones are named after ancient Greek warriors: Miltiades, Achilles, Epaminondas, Fokion, Themistocles and   Leonidas.

High spots
Do not forget to visit the cell where Theodoros Kolokotronis (best-known hero of the Greek revolution against the Turks) was imprisoned at Miltiades bastion and the small church of Saint Andrews inside the castle. Under Themistocles bastion lies the wonderful beach of Arvanitia where you can enjoy a refreshing swim after descending Palamidi, hopefully in a state of fulfillment by the knowledge and sights.

Did you know that?
For those who want to learn more about Palamides: The physician and astronomer Palamides, son of Nafplios and Isioni and grandson of Poseidon, was a hero of the Trojan War. According to mythology, it was him who invented weights and measures, some letters of the alphabet, fryctories (stations which transmitted messages by using fire), the games of pessoi (dice), astronomical calculations and the use of coins as monetary units.

Bourtzi : The castle of the throne
Castello dello Soglio was the first name of the Venetian castle, which along with Palamidi, is considered one of the landmarks of Nafplio. Nevertheless, the name that finally prevailed is Bourtzi, which in Turkish means « Island – Fort ».With the Venetian «castle of the throne» there is always a dilemma for you: Is it better to gaze it from a distance- like a postcard that never fades- or to wander in its microcosm and smell strong smells of history?

An elegant Italian castle
What is certain is that just looking at it is not enough; just like everybody else , you will probably want to know its history. Bourtzi was built on the islet of St. Theodoroi in1473 by the Italian engineer Gabelo and that is why its first name is Italian. Moreover, if you have heard people refer to Nafplio as «the chain harbour» (Porto Cadena ), this is because  there was, indeed, a mobile chain which connected Acronafplia with Bourtzi and whose purpose was to protect the harbour and the city from sea invaders.

From prison to hotel!
As years passed by, the Venetian castle was used in a variety of ways. Being, initially, the first prison of Kolokotronis (best-known hero of the Greek revolution against the Turks) and the residence of the executioners of Palamidi, it later offered housing to the Greek government twice. During the 30s it operated as a centre of the Greek national tourist organisation and from 1960 to 1970 as a luxury hotel and restaurant.

How to get there
Well, even if you strongly desire (staying at Bourtzi with a view of Nafplio, is not a bad idea, is it?), accommodation is not available there. Still, you may embark in one of the little boats that drop anchor at the dock and reach Bourtzi in 10 minutes by paying a fare of 4 euros.

Did you know that?
Several musical and cultural events are held at the Venetian castle during the summer. Their quality is not going to let you down! Soon, an exhibition– hall and a souvenir shop will be operating in the bastions and the restaurant – refreshment room will re-open.

Just 8 km from Nafplio, you will find the archaeological site of Ancient Tiryns. The Mycenaean acropolis with cyclopean walls, came to light progressively from 1876 and today is one of the World Heritage Sites, worth a visit.

The Mycenaean acropolis
Tiryns has been inhabited since Neolithic times, until its destruction by the Argians in the first half of the 5th century. Famous are the “Cyclopean” walls, which, according to Homer, the built themselves Cyclops. The first mythical king of the city was the product, great grandson of Danaus, or Nafplio. The monument for many years was under the ground has a lot of damages. However, there have been several successful rehabilitation efforts and the site is now open to visitors.

It is worth to see
At your visit at this archeological site, you can admire the West Promachona that is a great achievement of Mycenaean architecture, the famous for their size Cyclopean walls, Lower Acropolis and Geometric temple.

World Heritage Site
Greece, since 1981 has signed the Treaty of Unesco for the protection of monuments and world heritage sites. Its objective is protection from any kind of damage and destruction, so these monuments to pass on to future generations. At the Unesco international list have been included so far 17 monuments and sites in Greece, since they fulfill the predefined criteria to qualify paramount importance worldwide, historical, artistic, scientific, aesthetic, ethnological or anthropological point of view. Three of them are located in Argolis Mycenae, Ancient Tiryns and Epidauros.

Did you know that?
According to legend, King Eurystheus of Tiryns, ordered the labors of Hercules.
Head of the first excavation was Heinrich Schliemann. 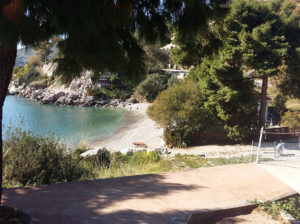 Assini is not famous only for it’s delicious mandarins. Once you visit it you will be impressed by it’s history and archaeological monuments. Let’s explore some of them.

The big village called Tzeferaga
Assini is just a few kilometers away from Nafplio (10 km) near the tourist Tolo and close to Drepano. During the ottoman period the village was called “Tzeferaga” by Tzeffers Aga, who was the commander of the region. In 1902 renamed in Assini, from ancient name of Assini, ruins of which, are preserved on the beach Kastraki (or Paliokastro just before Tolo). You can also see the Acropolis of Assini.

From the zenith to nadir
In the Mycenaean era Assini was a great town and it was the  grand port of Mycenae. 700 BC was  plundered by the Argious who the only that they left behind was the temple of Apollo Pythaea. After that the residents of Assini left their land and became settlers in Messinia.

Once upon a time there was Assini
The excavations of the Swedes, by the King Gustav in 1922, have highlighted the myth of Assini. Homer mentioned Assini it in the Iliad epic as people of Assini along with their king had taken part in the Trojan war.
In Barbunas hill you can see the famous caves where they say that it was hidden the king of Assini, when the enemies chased him. It is said that as the soldiers were looking for him, an officer watching prevented one soldier to look for him in the caves assumming thet if the king went to that way the webs of the spiders would have gone. So the spiders saved the king!